Want a piece of Mughal gardens in the pink city of Jaipur? The Sisodia Rani Ka Bagh is your place to be. 10 kilometers from Jaipur, on the Jaipur- Agra highway, Maharaja Sawai Jai built the palace garden as a gift of love for his second queen. The heritage garden is the largest, most interesting, and most impressive of all the gardens in Jaipur. Apart from the lush green trees and floral beds, the beautiful Charbagh-styled garden is famous for its multi-layered palace, pavilions, shrines, murals, frescoes, scenic, paintings, and fountains. The garden is equally famous among tourists and locals.

After an eight or seven kilometers drive from Jaipur on a highway connecting Agra, one can see a lush garden known as Sisodia Rani Garden that has been laid out in a unique architectural style and is a perfect place to breathe out the fresh air. This royal garden, officially known as Sisodia Rani Garden, was built by Maharaja Sawai Jai Singh in 1728 as a retreat for his second queen, Sisodia. Through the well-decorated walls of the park, which are adorned with paintings depicting Radha-Krishna’s love story, one can easily assay the king’s feelings toward the queen. The garden is dotted with chequered flowers of different varieties, waterbodies, foliage, pavilions, and galleries. On a nature walk or an idyllic stroll in the park, do visit the shrines dedicated to Lord Shiva, Vishnu, and Hanuman that can also be seen in the garden. The name can be translated as the ‘garden of Queen Sisodia’. Sisodia was the Udaipur princess who married Jaipur King, Sawai Jai Singh. The Sisodia Rani ka Bagh is a royal garden, located a little away from Jaipur. The garden is famous for its flora wealth, natural attractions, and relaxation. This garden holds beautiful water fountains, pavilions, flowerbeds, galleries, murals, water channels, and much more.

Sisodia Rani Ka Bagh is also called the garden & palace of Queen Sisodia. Ten km away along the Jaipur-Agra road the garden and the palace are situated in a picturesque gorge. The garden was built by the Queen of Jai Singh II as an escape from the intrigues of the court. The gardens and murals show the life of Lord Krishna, decorated in its interiors, there is a breathtaking and beautiful view of the natural landscape. The palace is decorated with bright murals. On the hillside are temples of Lord Vishnu, Lord Shiva, and Hanuman, the all-powerful heroic devotee of Rama. Nearby are natural springs beneficial for health. 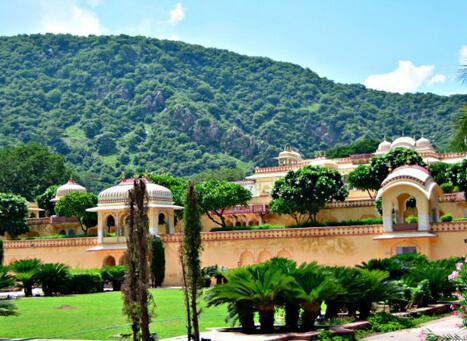 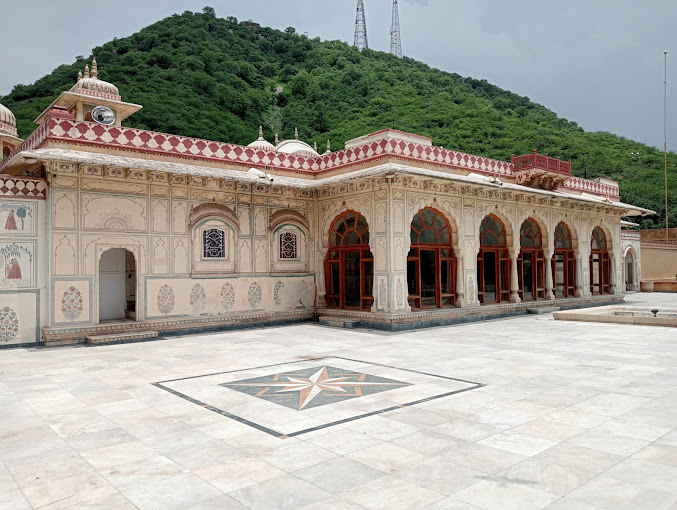 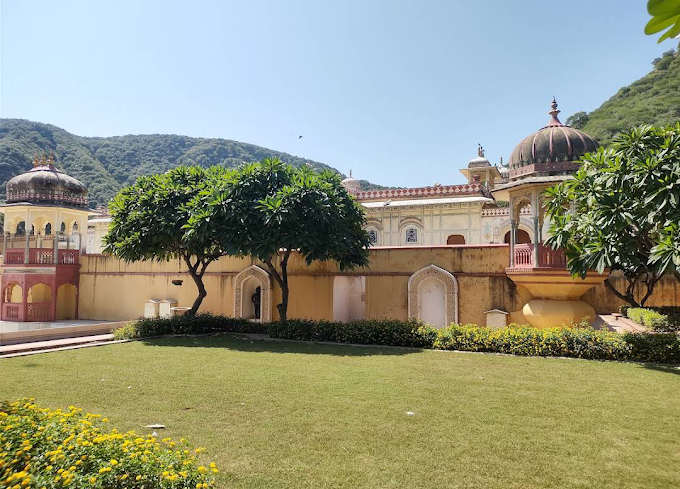 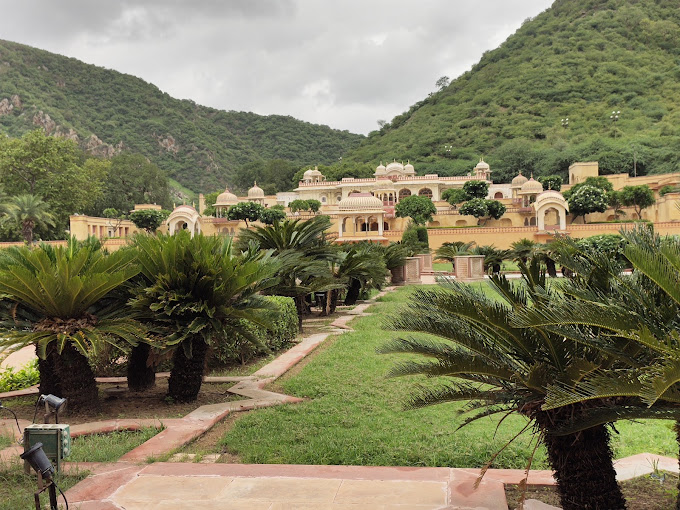 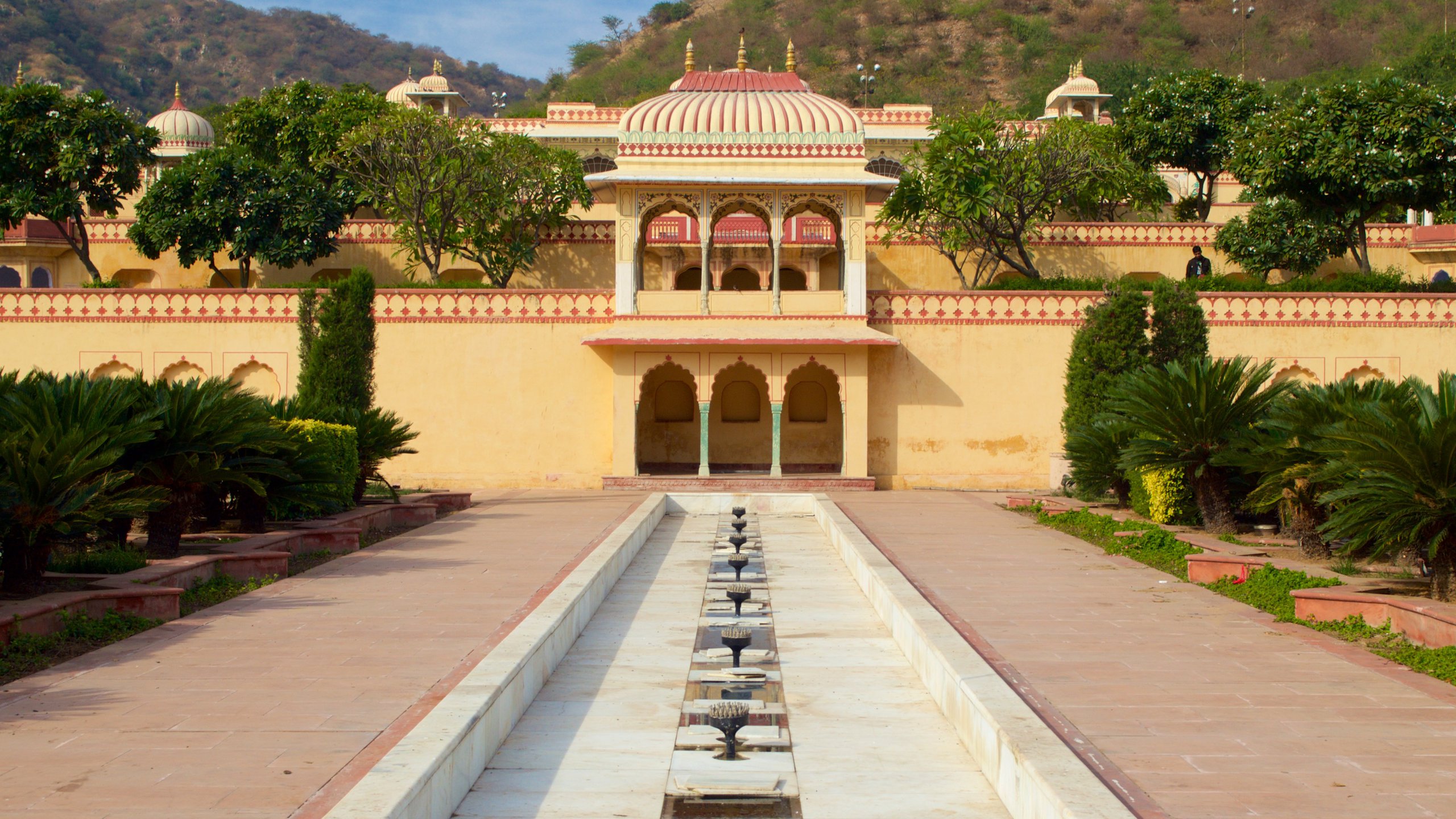 The Maharaja of Jaipur had a special affection towards his second wife, the Princess of Udaipur, and built a special garden as a retreat for his beloved queen. The princess belonged to the Sisodia Rajput clan of Udaipur who are believed to be descendants of the Surya Dynasty and hence, called Suryavanshis. The Maharaja built the garden in 1728 and gifted it to his beloved wife so she to get away from the humdrum of the royal court politics and intrigues. The garden was built in the 18th century by Maharaja Sawai Jai Singh for his second queen Sisodia Rani, Udaipur princess. This garden was used by the queen for relaxing. The garden was decorated with a mural painting of Lord Krishna and Radha to express the love that the king had for Sisodia Rani. The garden was specifically built outside the city to keep it away from the hustles and noises of local life.

Sisodia Rani Garden is a royal garden built on the premises of the Sisodia Palace in Jaipur. As the name suggests, it was built in 1728 in honor of the Queen of Maharaja Sawai Jai Singh II as a summer retreat. The stepped garden, although not too large in area, is considered to be a tranquil escape in the hot and arid region of Jaipur. The landscaped gardens occupy several cascading levels in front of the Sisodia Palace and have a central water fountain with channels running through. It does not take a lot of time to explore this attraction. So, tourists around Lal Dungri or those on their way to Agra can take a pit stop here. The best time to explore this garden is in the mornings or the evenings as the place is not densely covered with trees and the afternoon heat could become unbearable. The best part about visiting Sisodia Rani Garden is that it is close to most of the top places to visit in Jaipur such as Moti Dungri Temple, Rusi Rani Village as well as the most famous market to visit in Jaipur – Bapu Bazaar.

Sisodia Rani Garden consists of three levels of lush green lawns with a central fountain area. The topmost level is occupied by the Sisodia Palace. The second and third levels have considerably smaller garden areas running parallel to the palace entrance. The last and the lower-most tier of the step garden is a bigger expanse with a fountain in the center. Pathways with water channels running in the middle meet the central fountain from each side of the last tier dividing the garden into four equal halves. Each lawn is lined by shrubbery, and trees and some portions also have decorative climbers. The middle tiers of the step garden have pavilions and staircases for people to access the other levels. Sisodia Rani Bagh has been designed to complement the architecture of the palace. The chhatris, the pillars, and the courtyards are an amalgamation of Indian and Mughal Architecture. They are adorned with decorative paintings and murals of Lord Krishna and Goddess Radha. This garden is a wonderful blend of Mughal as well as traditional Indian styles of architecture and design. The pavilions and minarets overlooking the garden are features of Indian design.

The architectural layout of the Sisodia Rani ka Bagh is mostly influenced by the Charbagh style of the Mughal gardens. The gardens are multi-layered with flower beds and fountains, typical of the Mughal gardens. For those who are unaware of the Charbagh garden style, this was introduced by the Mughals (specifically Babur) after they invaded India. The Charbagh is a native Persian style of a quadrilateral or four-part garden divided by walking paths, sometimes lined by water beds that intersect at the central point. The principle of the quadrilateral garden design is taken from mentions in the Qur’an where Charbagh is intercepted as gardens of Paradise. The Mughals and the Kachwaha rulers of Amber had a great political association as well as family relationships as one of the Kachwaha princesses was married to the Mughal emperor Akbar. The Kachwahas also fought many wars alongside the Mughals leading the armies. This is one of the reasons for most of the architecture of Amber and Jaipur has Mughal influence.

The spires and pavilions of the Sisodia Rani ka Bagh are frescoed with Hindu motifs and paintings from the life of Krishna and are built in Indian architecture. The Queen’s palace is placed in such a way that it overlooks the entire garden. The murals on the walls of the palace are majorly based on the love stories and legends from the lives of Lord Krishna and his most beloved Radha. In addition to the murals of Radha and Krishna, the palace walls also have murals and paintings of hunting scenes. The garden is designed with a mixture of Indian style and Mughal architectural styles. The spires and pavilions of the garden are designed in the Indian style. The wall paintings and decorations are also a form of Indian style. The flowerbed arrangement, water channels, and fountains are designed in the Mughal style. There is a small shrine and a natural spring near the garden that is dedicated to Hindu Gods; Lord Shiva, Lord Hanuman, and Lord Vishnu. The garden overlooks the grand palace of the queen, which is filled with a mural painting of hunting scenes, scenes from the story of Lord Krishna, and so on. The palace is open for tourists to explore. Sisodia Rani Ka Bagh is situated at a distance of 10 km from Jaipur city. This royal garden was built by Maharaja Sawai Jai Singh in 1728 for his second queen Sisodia. The beautiful wall paintings of the Radha-Krishna love story at Sisodia Rani Garden are adorned with paintings and descriptive details on the wall that truly represents eternal love and is in harmony with the essence of this garden which is itself a symbol of love.

Enjoy the non-violent atmosphere of the former sanctum sanctorum of the queen if you walk around the garden and watch the thrilling animals and birds as you stroll. Monkeys are regularly seen swinging through the woods, as well as peacocks can be seen moving around to display their colorful feathers. The palace and royal gardens are built with the help of Maharaja Sawai Jai Singh as a quiet retreat for his second wife, known as the Sisodia Rani. The gardens are laid out in charbagh fashion, a typical Mughal lawn design that typically serves up the upright shape and water capabilities. As you walk around, you’ll be able to see winding waterways, spouting fountains, and well-crafted sculptures, in addition to the many decorative pavilions. The serene beauty of the lawn will give you a refreshing experience. Although Jaipur has many other great gardens like Vidyadhar Garden and Kanak Vrindavan Valley, the charming ambiance of Sisodia Rani Ka Neagh sets it apart from others.

The garden is at prime beauty during the winter season and early summer seasons. The winter season starts in October and ends in February. This is the time for pleasing walks, romantic strolls, and other relaxing activities. However, during winter, you cannot find many flowers in the garden. The recent rains would have brought lush greenery to the region. The blooming season starts in summer. March to April is the best time for enjoying flowers, photography, and evening stroll. The best time to visit the gardens would be between Monsoon and Winter months as that is the best time when flowers are in full bloom. Hence, July to March would be the best time.

As Jaipur city is well connected via all means of transport, the Sisodia Rani Ka Bagh is accessible quite easily from all parts of the city. One may rent cabs (Ola, Uber, etc.) or hire taxis, auto rickshaws, and e-rickshaws to reach the garden. The local state buses also can be used to reach here at a reasonable price. This option is best for people traveling on a budget.

Sisodia Rani Garden and Palace were built by Chandra Kunwar, the wife of Maharaja Sawai Jai Singh II (1699 – 1743), who was the princess of Udaipur. According to the terms of this marriage, she had the status of Patarani which is Pradhan Rani of Jaipur king dome. It is said that Maharaj Kumar Madho Singh was born in this palace. Later on, He was the king of Jaipur in 1750 AD. Sisodia Rani Garden and the palace were built in 1728 AD. After entering this garden, first of all, a beautiful palace appears. The Sisodia Rani Garden was built on the foothills of a hill which makes it even more beautiful. The way to reach this Garden is also one of a kind. There are windows of the palace on one side. Which makes the Sisodia Rani Garden road very special. The walls of this Sisodia Rani palace have been painted with a colorful design. Which enhances the beauty of this palace. This whole Garden was built on three floors from the palace down to the main garden.