Observatories to Provide Precise Measurement of Time in Jaipur, Rajasthan !!

Hunter states that Jai Singh himself devised the Samrat Yantra, the Jaya Prakasa, and the Rama Yantra. These three instruments are indeed peculiar to Jai Singh’s observatories and must be to some extent attributed to Jai Singh’s ingenuity. The Samrat Yantra, sometimes called “Supreme Instrument” is an equinoctial sundial of enormous proportion. Although one of the simpler instruments, and not too different from sundials which had been developed hundreds of years earlier, the Samrat Yantra is important because it measures time to a precision that had never before been achieved.

Shastansh Yantra (next to Vrihat Samrat Yantra) This instrument has a 60-degree arc built in the meridian plane within a dark chamber. At noon, the sun’s pinhole image falls on a scale below enabling the observer to measure the zenith distance, declination, and diameter of the Sun.) Vrihat Samrat Yantra (the world’s largest gnomon sundial, measures time in intervals of 2 seconds using shadow cast from the sunlight). The Vrihat Samrat Yantra, which means the “great king of instruments”, is 88 feet (27 m) high; its shadow tells the time of day. Its face is angled at 27 degrees, the latitude of Jaipur. The Hindu chhatri (small cupola) on top is used as a platform for announcing eclipses and the arrival of monsoons. 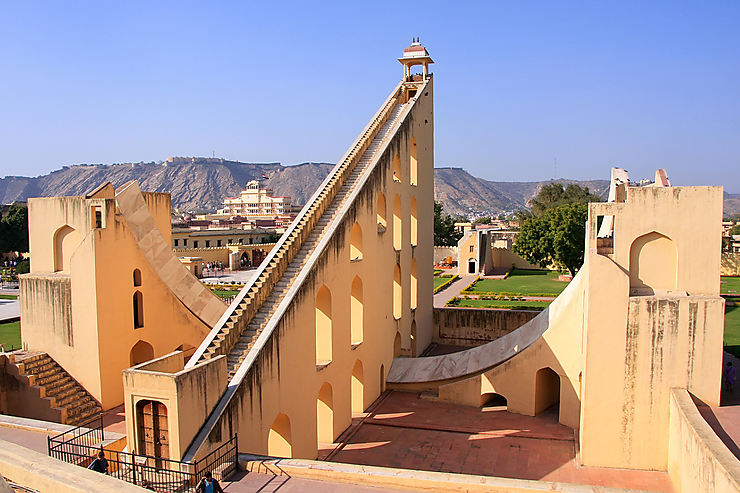 The instruments are in most cases huge structures. The scale to which they have been built has been alleged to increase their accuracy. However, the penumbra of the sun can be as wide as 30 mm, making the 1mm increments of the Samrat Yantra sundial devoid of any practical significance. Additionally, the masons constructing the instruments had insufficient experience with the construction of this scale, and the subsidence of the foundations subsequently misaligned them. The Samrat yantra, for instance, which is a sundial, is claimed to tell the time to an accuracy of about two seconds in Jaipur local time. The Giant Sundial, known as the Samrat Yantra (The Supreme Instrument) is one of the world’s largest sundials, standing 27 meters tall. Its shadow moves visibly at 1 mm per second, or roughly a hand’s breadth (6 cm) every minute, which can be a profound experience to watch.

Located at Jantar Mantar, Jaipur, the Laghu Samrat Yantra is a scientific calculation instrument used to measure time. This yantra or machine is a sundial that can give the time to an accuracy of 20 seconds. Jantar Mantar is a World Heritage Site and one of the most visited places in Rajasthan, India, as it provides some valuable information, especially for those who are interested in scientific calculations, including measurement of time, predicting eclipses, locating stars, and a lot more.

This is one of a series of models made in 1884-6, showing the astronomical instruments of the Jaipur Observatory, India. These were exhibited in 1886 at the Colonial and Indian Exhibition, in London. Built of masonry the Jaipur instruments were used to accurately measure the position of the Sun, stars, moon, and planets. Lacking telescopes these devices used naked-eye sights and massive but precise construction. Known as a Samrat Yantra, this instrument was built and designed under the supervision of Maharajah jai Singh II. Finding European, Islamic, and Hindu astronomical tables inaccurate, Singh decided to make his observations to improve matters. As ruler of Rajasthan, he built several observatories starting in 1724 with one near Delhi.

The Samrat Yantra in Jaipur is part of the Jantar Mantar (translation: instruments for calculation), a Big Collection of 14 devices built for measuring time, astronomy, and for astrology, in the 18th century. The Jaipur observatory in Rajasthan, which contains the Jantar Mantar instruments, is the largest and best preserved of the ancient Big Observatories. The Samrat Yantra (translation: Supreme Instrument) is the World’s Largest Sundial. Like the other tools of the Jantar Mantar, the Samrat Yantra is a fixed tool. Its face is angled at 27 degrees, which is the latitude of Jaipur. There is a small cupola on top of it, used in Hindu tradition to announce eclipses and for weather prediction, e.g. the arrival of monsoons.