A Historical Monument in the Jaipur !!

Patrika gate is one of the most beautiful locations of Jaipur, this is a big gate with beautiful architecture and this location is for all kind of age group people to enjoy a good evening, everyday musical fountain show for visitors is one of the big attraction of this place. Each pillar of the Patrika gate is painted with some important facts about different parts of the Rajasthan state. The Patrika Gate in Jaipur is a famous monument and tourist attraction in the capital city of Rajasthan. Located 30-minutes outside of the city center, the gate serves as an entrance to Jawahar Circle Garden. And many believe it to be one of the most photographed spots in all of India. While the gate is just one of the many architectural wonders in Jaipur, the opulent design is genuinely awe-inspiring. And the vibrant and intricate walkways serve as a true reflection of Rajasthani culture.

Patrika Gate is an outstanding place to witness the rich and vibrant architectural and cultural legacies of Rajasthan. It is not merely a splendid place for photographic opportunities. One should expend adequate time to enjoy each of the painted panels. Patrika Gate reminds me of this quote “Find a beautiful place and get lost”

Although this gate has been based on the seven original heritage gates that were used to provide access to the walled city of Jaipur, this gate is a relatively new attraction. The Patrika Gate is now the ninth gate of Jaipur and was named after a local news company called Patrika. It was constructed and opened to the public in 2016. In 2020 the Prime Minister of India, Narendra Modi, inaugurated this gate via video conferencing! In his address, he commended Kulish Ji from the Patrika Media Company for his contribution to Indian journalism. The Patrika Gate was built by the Patrika group of Newspapers on the Jawaharlal Nehru Marg in Jaipur.

It is being claimed like the walled city, numeral nine plays a critical part in the making of the Patrika Gate. The nine-point Vastu principle has been given special attention while designing Patrika Gate. There is a total of nine pavilions. Each pavilion is 9 feet wide. The width of the gate is 81 feet and height 108 feet which coincides with the width of principal markets in the walled city. Some experts claim it to be 111 feet and not 108 feet. Patrika Gate is being touted as the ninth gate of Jaipur. Patrika Gate is the southern gate of Jaipur.

The Patrika Gate is an entranceway to the Jahawar Circle Park which, if you didn’t know already, is the biggest circular park in Asia on a traffic signal! On the outside, you’ll find a huge elaborate pink gate looming over the peaks of luscious trees. On the inside of the gate, you’ll find a fabulous rainbow walkway! As you walk under the gate, you’ll find a row of fabulous archways. Each one has been decorated with Rajasthani culture in mind. It showcases major attractions in Jaipur, such as Jal Mahal, as well as colorful artwork. You’ll truly be mesmerized by the decoration and it will take you a while to stop admiring every detail. It’s easy to see why this is a top photo location in the city. It’s incredibly gorgeous. 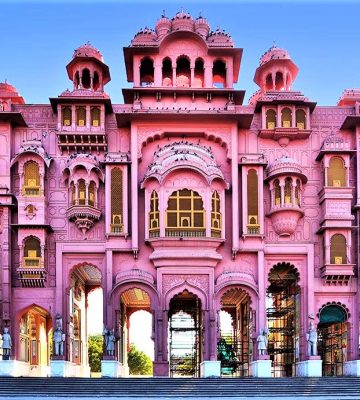 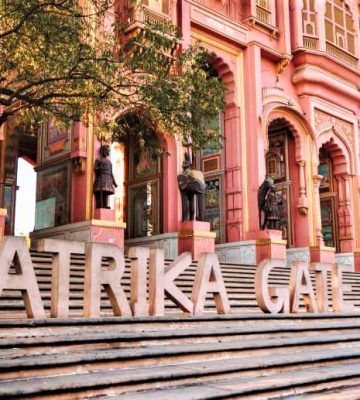 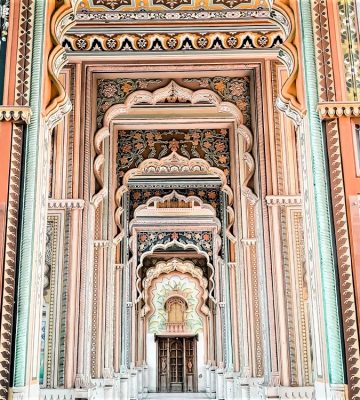 Each architectural element and design in the gate is unique and not repeated. It makes for a remarkable place for architecture students and art lovers to visit for inspiration. The building facade is pink in color which is many shades lighter than the famous Jaipur pink – terracotta pink. The golden color is also used to highlight some areas of the facade. The facade is flanked by figures of elephants, horses, and soldiers. These are important elements associated with the valor of the princely states of Rajasthan. Battles and wars comprise an integral part of the history of princely Rajput states.

Looking at the architecture of the Patrika Gate, it is evident architect has devoted a lot of time to arrive at the final design. It is hard for a layman to comprehend the painstaking efforts required to design this masterpiece. The images and elements of Rajasthan are brought alive in Patrika Gate through its hand-painted walls and ceilings. Each pillar and column depict the scenes from various regions of Rajasthan. One gets a glimpse of the rich architectural and cultural legacy of the state. The wall panels and ceilings are beautifully painted with intricate motifs and colors.

HOW TO GET TO PATRIKA GATE IN JAIPUR

Jaipur is an essential addition to any India itinerary. It is one of the most popular tourist cities in the country and forms a part of the Golden Triangle Route. You can conveniently reach Jaipur via bus, train, or plane from all over the country. Alternatively, you can take public transportation to the gate from anywhere in the city. Taxis, rickshaws, and buses are easy to come by in Jaipur.