A Beautiful Lake in Jaipur, Rajasthan !!

Man Sagar Lake is an artificial lake, situated in Jaipur, the capital of the state of Rajasthan in India. It is named after Raja Man Singh, the then ruler of Amer, who constructed it in c. 1610 by damming the Dravyavati river. The Jal Mahal is situated in the middle of the lake. The lake, situated to the north of Jaipur city lies between Amer, the historic city, and Jaipur, the provincial headquarters of Rajasthan state. It has a water spread area of 300 acres (121 ha) and is enclosed by the Aravalli hills on the north, west, and eastern sides, while the southern side consists of plains that are intensely inhabited. There is the Nahargarh Fort (Nahargarh meaning home of tigers) in the hills that provides a commanding view of the Man Sagar Lake and the Jal Mahal palace, in addition to a beautiful view of the city of Jaipur. The lake was created by constructing a dam across the Darbhawati River, between Khilagarh hills and the hilly areas of Nahargarh, in the 16th century.

The catchment area (watershed) for the lake is 23.5 square kilometers (9.1 sq mi) contributed by a semi-urban area as to 50% (generating in heavy rains unpaved street erosion) and hilly terrain accounting for the balance, the largely-deforested or precipitous Aravalli hills, which also creates siltation. It is believed such deposition did not have to be fixed with dredging and filtration before the 20th century. Rainfall averages 657.4 millimeters (25.88 in) per year (90% of which occurs from June to September). The outlet end of the dam feeds a large irrigation system (obligatory water demand for this is reported to be 2,410,000 cubic meters during the five months from November to March). Two large males (streams) that also drain the surrounding Nahargarh hills and Jaipur are the Brahmpuri and Nagtalai, which bring in untreated sewage, in addition to sediment run-offs of unpaved streets.

Man Sagar Lake is an artificial lake, situated in Jaipur, the capital of the state of Rajasthan in India. It is named after Raja Man Singh, the then ruler of Amer, who constructed it in c. 1610 by damming the Dravyavati river. The Jal Mahal is situated in the middle of the lake. Man Sagar Lake is a man-made lake with the magnificent Jal Mahal Palace in the center. The Man Sagar Lake is located in the heart of the city. The Jal Mahal is the main attraction at the lake constructed in the middle of the lake. The Man Sagar Lake is better known as the lake housing the famous Jal Mahal. Surrounded by hills on 3 sides, this lake has a promenade on the fourth side, where visitors come to take photos. The lake itself is not in good shape, with cleanliness (rather, the lack of it) being a major issue. Also, there is no boating facility provided, which could be useful for tourists as well as a money-spinner for the authorities. On the positive side, the pavilions in the lake, offer great opportunities for bird watching, with a large number and variety of birds gathered on them at any given point in time. Sprucing up the place by authorities will make it a top attraction.

Lake Man Sagar (Mansagar) is a man-made lake north of Jaipur in which the staggering Jal Mahal Palace stands. Lake Mansagar has experienced a stunning change in the course of the most recent 5 years, where once it was a grimy and contaminated sewage overspill for Jaipur today the lake is abounding with life and transient fowls are currently coming back to the crisp waters. The region encompassing Man Sagar Lake is beginning to end up mainstream with both Jaipur’s inhabitants and guests as the cooling waters and untamed life is a reviving break from the contamination and residue of the city. Most explorers’ experience of Lake Man Sagar is the concise stop to photo the Jal Mahal however a compensating evening can be spent by the cooling waters of the lake. 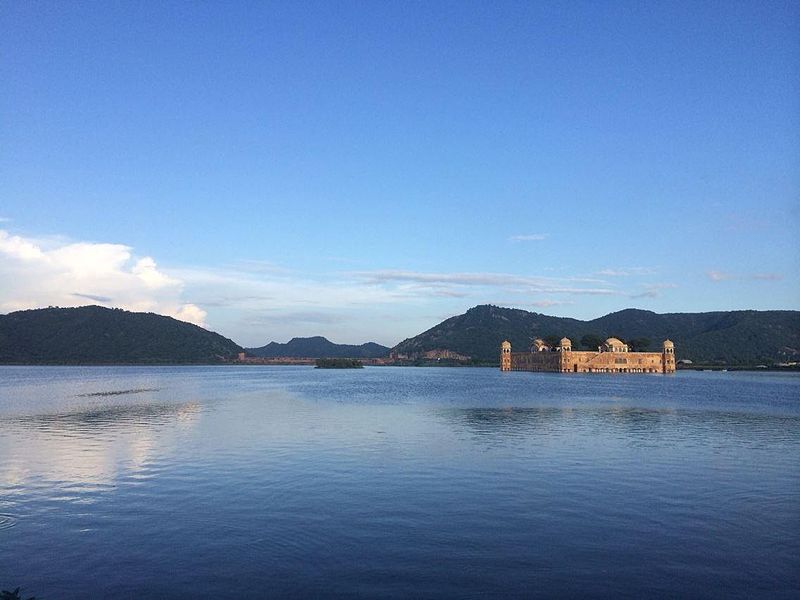 After independence, the lake was no more used for entertainment purposes. For decades, the hills surrounding the lake had to undergo large-scale deforestation causing it to be nearly bare. In 1962, the sewage from the enclosed city was redirected into the lake. The capacity to store water decreased drastically, and the Jal Mahal palace went underwater to a depth of 3m, the bottom became more profound during the rainy season. In 1981, heavy rain caused a flood that brought a large number of sediments and sand from the southeastern region that filled a large area of the lake. The man Sagar lake– the only water body near the city, holds a great future for recreational tourism. With the urbanization of Jaipur city in recent years, the ecological system of the lake and its surroundings has gotten worse drastically.

The Man Sagar Lake is a 300-section of Land Lake, encompassed by the Nahargarh hills. The counterfeit lake was framed because of the founding of a dam crosswise over waterway Darbhawati in the eighteenth century. It is today, the main huge water body in the city of Jaipur. Jal Mahal, an architectural destination, is arranged amidst Mansagar Lake. The lake has been a characteristic living space for more than 150 types of nearby and transitory birds. Water gives reasonable living to innumerable types of the oceanic biological system like fish, birds, aquatic animals, microorganisms, and oceanic vegetation.

Lake Man Sagar lies in a characteristic melancholy that would, without human obstruction, be every year filled by the storm downpours. The regular shallow lake was upgraded by a dam extending between the two hill scopes of Amer and Amagarh. This underlying dam was built in the sixteenth century after a lethal hunger in 1596 was brought about by a disappointment of the heavy shower rainstorms. “Maharaja Mansingh I” built the crude dam in 1610 from soil and move over the Darbhavati River to build the dimensions of put away water and keep another famine. The height of the dam was expanded and armored in the eighteenth century by Maharaja Jai Singh II who additionally built the water royal residence. This later dam was built from a strong slice move to give extra quality and gave Lake Man Sagar its present most extreme profundity of 7 meters.

WHY YOU SHOULD VISIT MAN SAGAR LAKE JAIPUR

Migratory birds abound in Man Sagar Lake. This location’s all-around gorgeous vistas will wow you. This man-made lake adds to the city of Jaipur’s attractiveness. Man Sagar Lake has recently undergone extensive cleaning, making it more attractive and brimming with migratory birds in my opinion. Jal Mahal, an outstanding work of architecture with a structural base in water, stands in the middle of this lake. People come here to sit and relax for hours, taking in the relaxing beauty and vibe. This lake makes the environs cooler than the rest of the city in the mornings and nights, inviting people to spend time here.

The man Sagar Lake, is a 300-acre lake, surrounded by the Nahargarh hills. The artificial lake was formed as a result of instituting a dam across the river Darbhawati during the 18th century. It is today, the only significant water body in the city of Jaipur. Jal Mahal, an architectural monument, is situated amid man Sagar Lake. The lake is approximately 130 ha in its full spread. The lake has been a natural habitat for more than 150 species of local and migratory birds. Water provides a sustainable living to countless species of the aquatic ecosystem like fish, birds, insects, microorganisms, and aquatic vegetation. The lake suffers from serious problems of siltation and settled deposits, contamination from the inflow of wastewater, a decrease in surface area due to artificial land formation as a result of eutrophication, and loss of water due to the outflow for downstream irrigation during summer. The majority of the sewage is flowing to the lake body untreated and hence there is severe contamination of the groundwater in and around the lake area.

This contamination makes the groundwater unfit for drinking and in addition results in a serious health hazard. Moreover, the rainwater mingled with the polluted water of this lake makes it stink. The lake has BOD-20 mg/L and Total nitrogen-20 mg/L. In the past, several attempts have been made by the Government of Rajasthan to restore the ecological and environmental condition of the lake and its adjoining area. However, none of these attempts yielded any positive result because of the paucity of funds and non-incentivized approach to taking up restoration. India infrastructure and finance services (IL&FS) was entrusted with the job of finding a permanent solution to the development requirements of the project in the year 2000. It involved the private sector in the sustainable development of the project area and created a public-private partnership between the state government and Jal Mahal Resorts Pvt Ltd (JMRPL). A grant of Rs. 24.72 crores was allocated for the restoration under the National River Conservation Program (NRCP), in 2002. JDA (Jaipur development authority) was appointed as the nodal agency for the lake restoration part of the project. In 2007, JMRPL took the whole area of the lake (310 acres) and around it (totaling 432 acres) on a 99-year lease from the government of Rajasthan, for restoration.

From 2008 onwards, three wetlands of a total 40,000 sqm area are under construction in the vicinity of Jal Mahal (man Sagar Lake) to facilitate filling up the man Sagar Lake with clean water. The sewage water, which is at present routed to the lake, will be diverted into these wetlands. Plans are made to plant algae and water hyacinths to absorb the toxic elements. The clean water will then flow into man Sagar Lake.