A Secret Room in the City Palace Jaipur, Rajasthan !!

‘Sukh Niwas’ is white with a little blue and just being there fills you with a sense of peace and calm. ‘Rang Mandir’ is the mirror floor and its walls, pillars, and ceiling are decorated with mirrors of all sizes. The dining room on this floor has pillars and a ceiling covered with Mughal motifs and royal dining tables. ‘Shobha Niwas’ has mirror walls with blue tiles and gold leaf designs. On the second floor, the stunning Chhavi Niwas is a beautiful bright blue with white detailing. This room was used to enjoy the monsoon rains.

The first floor is where you’ll find the main part of the Maharaja Sawai Man Singh II museum, home to a rare collection of royal family artifacts. Everything from old weaponry, carpets, and manuscripts, to blue pottery, block prints, and antique Indian artwork. A super recognizable spot is the Sukh Niwas, commonly known as the ‘blue room,’ which is named after Maharaja Sawai Jai Singh’s wife. This room is a fully furnished royal dining room on the second floor, recognizably bright blue in color with gorgeous white detailing. 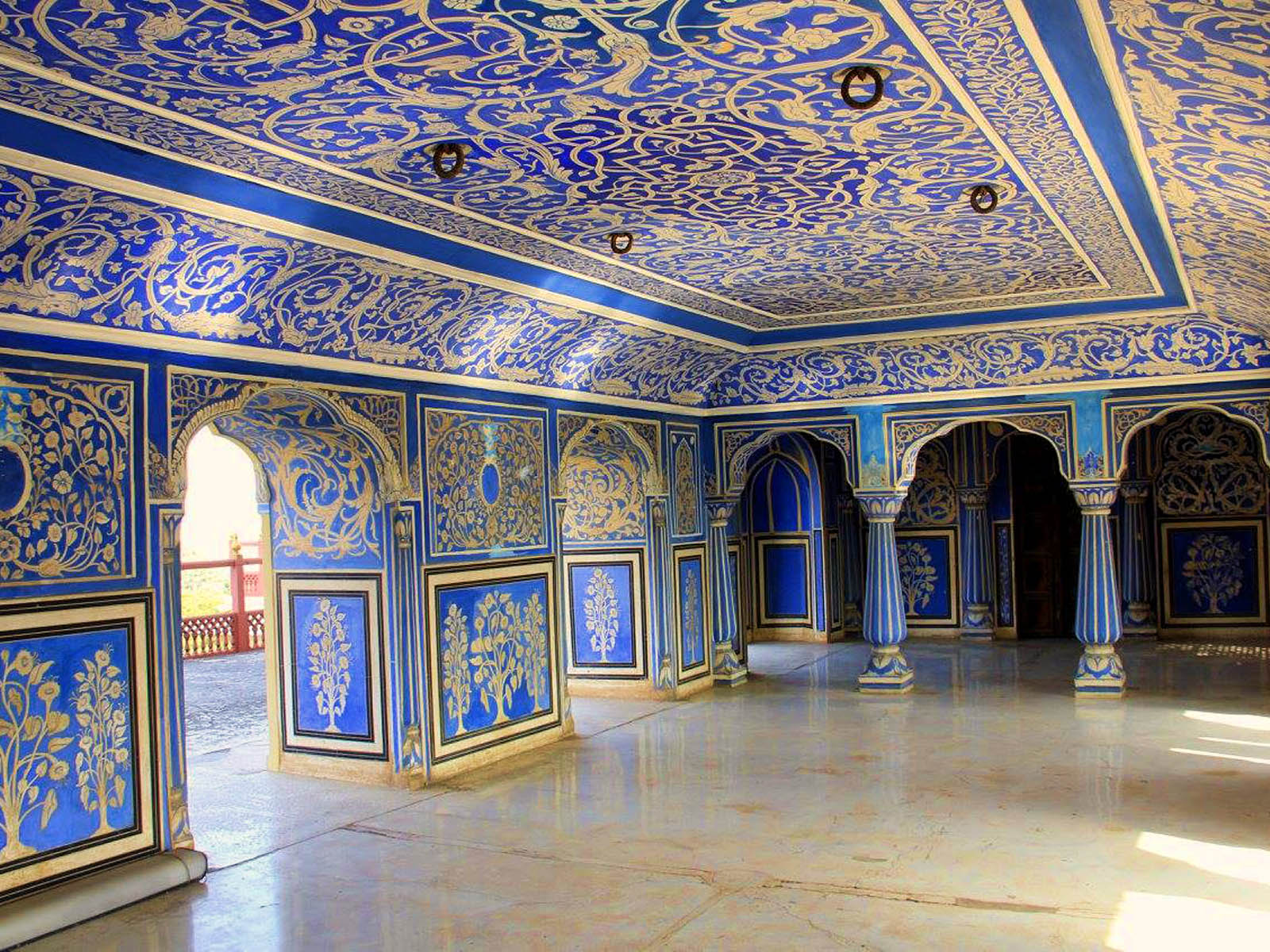 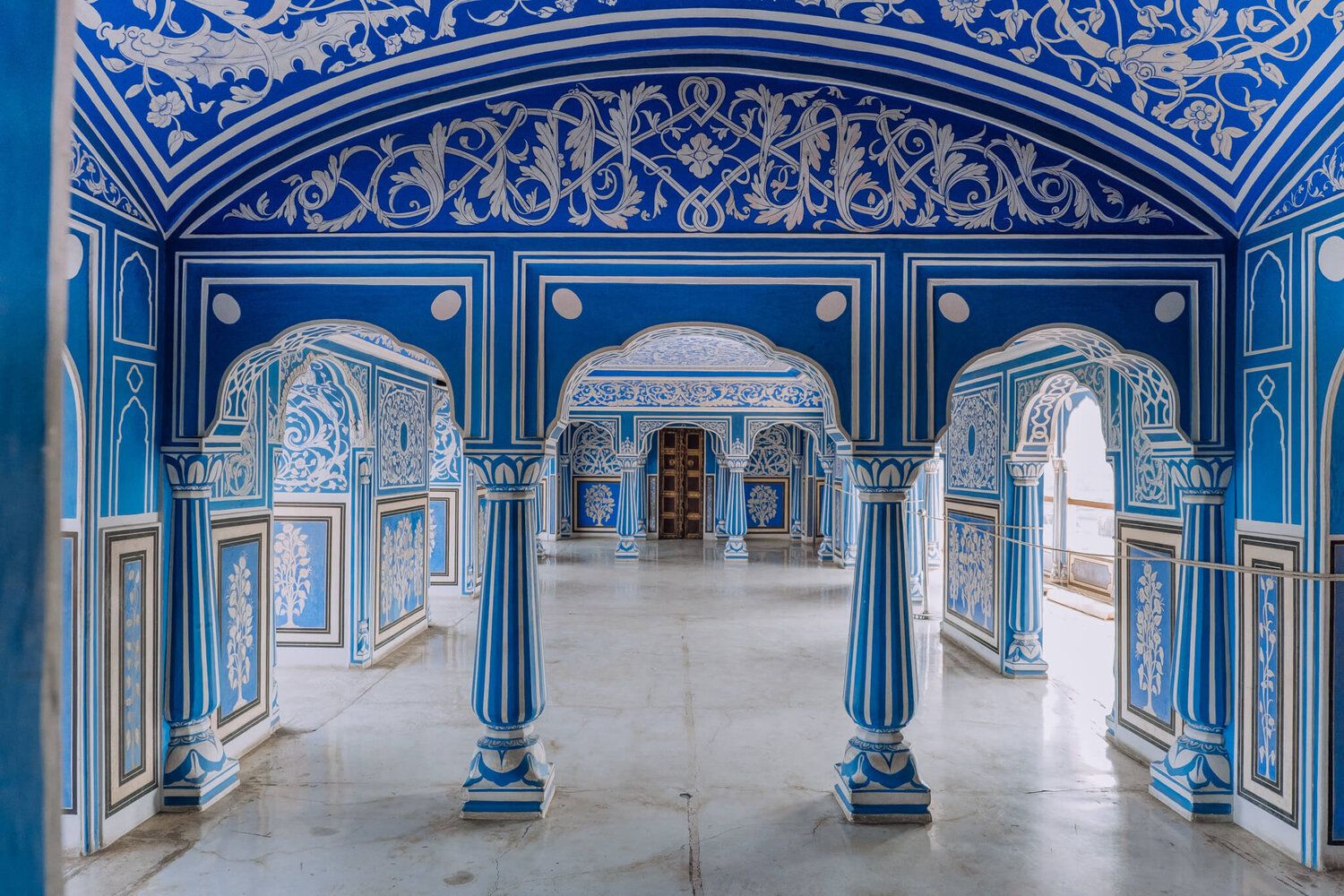 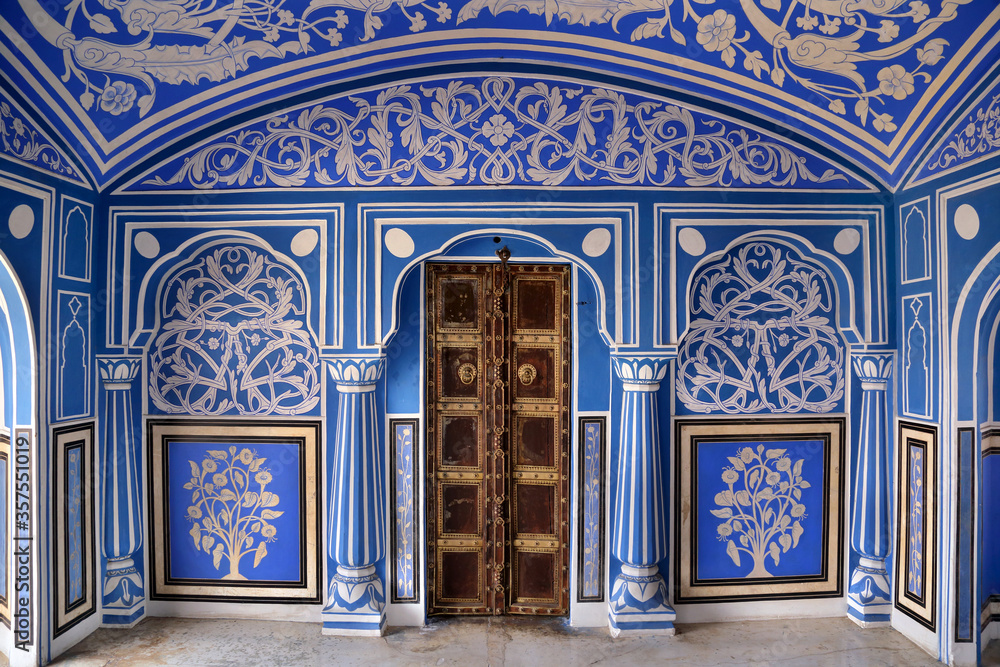 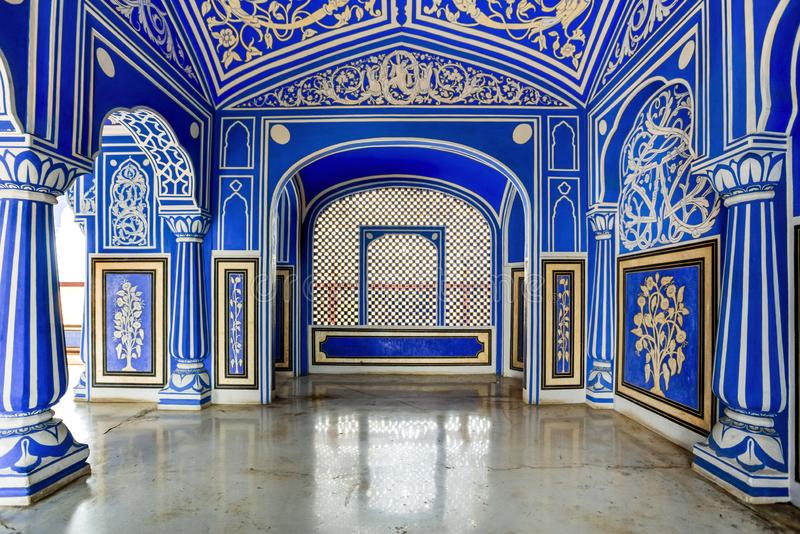 There are two types of tickets you could buy at the City Palace: just the museum tour (cheaper), which gets you to access to the museum and the outdoor courtyard, or the Royal Grandeur which comes with a personal guide and a tour of the stunning private blue room (Chhavi Niwas). The Royal Grandeur ticket is well worth the extra price since you get access to the blue room. If you’ve bought the full city palace ticket, head to the private blue room area (Chhavi Niwas). The experience here is much better since not many people pay for the more expensive ticket. We had about 20 – 30 minutes by ourselves to soak in the details and beauty of the Blue Room.

Chandra Mahal is one of the oldest buildings in the City Palace complex. It has seven floors, a number considered auspicious by Rajput rulers. The first two floors consist of the Sukh Niwas (the house of pleasure), followed by the Shobha Niwas with colored glasswork, then Chhavi Niwas with its blue and white decorations. The last two floors are the Shri Niwas and Mukut Mandir which is the crowning pavilion of this palace. The Mukut Mandir, with a Bangalter roof, has the royal standard of Jaipur hoisted at all times, as well as a quarter flag (underscoring the Sawai in the title) when the Maharaja is in residence.

As Jaipur was only the city we visited in the state of Rajasthan and City Palace was the only palace in Jaipur, we paid the exorbitant ticket price of INR3,500 per person. There are other tickets sold at a lower price range but we read about the beautiful blue room in the palace and we can only access the rooms with the most expensive ticket. The palace on the whole was very beautiful. While we were there we saw that the audience hall of the palace was being decorated for a wedding. We understand from our guide that the palace can be hired for weddings and other functions. There were fine restaurants on the property too, besides fashion boutiques. The highlight of our trip was the inner rooms such as the blue room, mirror room the Diwali room. The mirror and Diwali rooms were ornately-decorated every inch from the wall to ceiling.

The blue room was just a painted room but it is very Instagram-worthy. We were the only tourists when we visited the rooms. In the mirror room, the security guards on their own accord lighted candles and waved them around to show us their reflective properties. Our guide insisted we take a video of it. The guards also repeatedly offered to take photos for us. The price of our ticket includes a free drink and some biscuits in an eatery owned by the palace. We also saw the state guests’ apartments where photos such as Princess Diana and Oprah Winfrey were displayed, the dining room where the royalty entertained their state guests, and the 4 gates decorated according to each season. We did not visit the museum which there is one on the property.