Old-world fixture presenting a gourmet, international menu in a historic space with outdoor seating. Famous spots deserve famous fare and Baradari gives you just that. Divija Singh created a menu that will give you contemporary as well as traditional Rajasthani food. Since they have a clientele that constitutes a lot of foreigners, they try to keep the dishes and ingredients light and easy on everyone’s palates. Creative Re-use Winner at INSIDE – World Festival of Interiors in Berlin, Baradari at City Palace Jaipur explores how design can bring inherent value to a place when conventions on conservation and adaptive reuse are looked at through a fresh lens. Existing buildings were given a new expression by stripping off paint and cement plaster layers. The exposed rubble masonry was then repaired with traditional lime mortar with details in lime plaster. A key conceptual move was to use the courtyard as a binding element for the new program rather than an extension. An existing intermediate structure, a toilet block, was dismantled from the courtyard to open up the area visually and spatially. A Pavilion in the form of a Baradari was inserted as a bar into the courtyard to divide yet link the two zones that flank it.

The skilled artistry of local craftsmen in marble is given a graphic vocabulary for flooring, the Pavilion, dado work, benches, table tops, and more. Built-in handcrafted marble and brass, the contemporary expression of the Baradari-inspired Pavilion heightens the surrounding historic vocabulary and gives the place its key identity. Mild steel and brass are used for bespoke lighting and door design. Constrained budgets encouraged the re-use of furniture salvaged from the Palace, alongside the new, with patterns inspired by hybrid influences to give them a fresh lease of life. Several countries in Asia have a repertoire of historic buildings but more importantly, there are countries such as India, which have a rich legacy of Living traditions of crafts and arts that are dying as they have been unable to reinvent themselves to today’s ideas and needs. Baradari serves to be a demonstration of how active engagement of these craftsmen and artisans in new design applications can bring both, an exciting flavor to the project, and open up new ways of thinking for these artisans.

Al fresco dining in a courtyard that’s several centuries old, relishing laal maas (mutton curry) with scalloped potatoes and brie kachori (a savory snack)—it makes for an impeccable scene. While the former is a twist on a traditional favorite from Rajasthan, the latter is a popular street food in India. In Baradari at the City Palace, Jaipur, however, both dishes are redefining the gastronomic vocabulary. It’s not just the food that’s getting reinvented; the building of this fine-dining restaurant—which opened earlier this year—is a fitting tribute to the rich heritage and craftsmanship of several anonymous yet talented artisans. This is a place with a strong personality, an example of how design brings inherent value to a place when conventions on conservation and adaptive reuse are looked at through a fresh lens. “What we have done in Baradari is not bring back the old,” says Ambrish Arora, founder and principal architect of AD50 firm Studio Lotus, who, along with his team, transformed the 14,000-square-foot space. We are sitting in his office in New Delhi when Arora explains his point: “It is adaptive reuse. If the role of buildings is to be adapted for use in contemporary times, the role of history is to become a window that connects the past to today.” 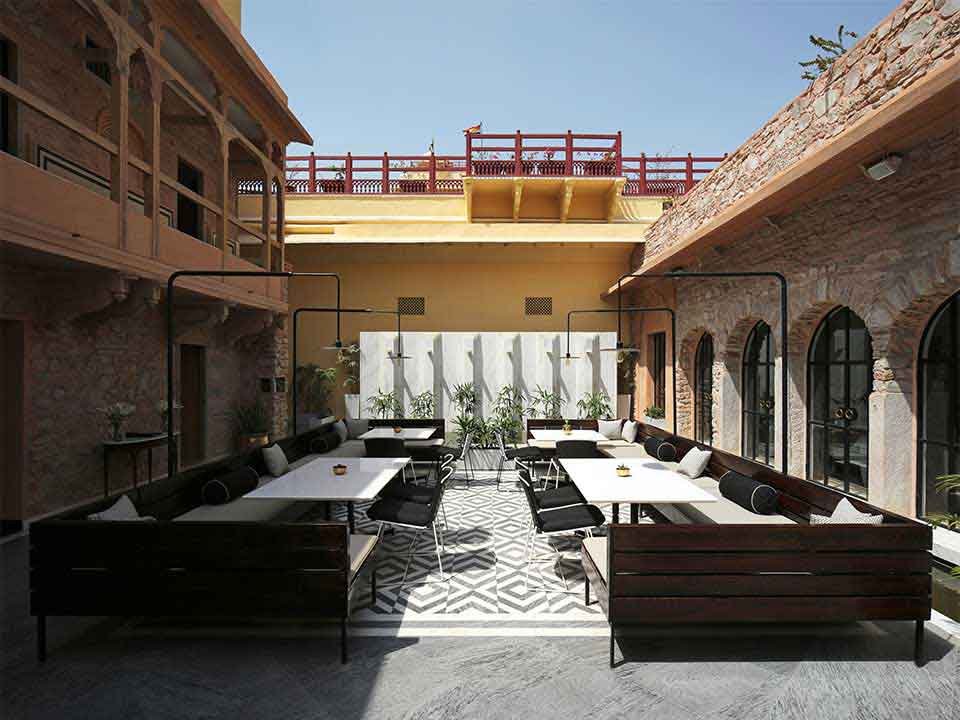 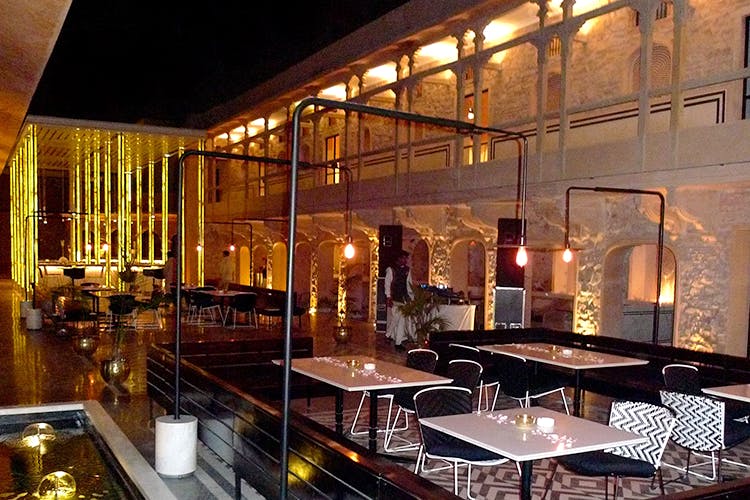 Step on Baradari’s intricately inlaid, black and white patterned floor—a modern take on traditional Rajasthani leheriya (a hand-dyed striped pattern from the state) created in local marble—to know what Arora means. The ceiling, walls, and niches feature contemporary design patterns in traditional third (mirror) work. An exquisite fluted marble water cascade forms a sculptural end to the courtyard. The designs and upholstery material of the furniture reflect the hybrid influences. The pavilion (baradari is Urdu for a pavilion with 12 doors) constructed in backlit translucent marble and glass provides a contemporary counterpoint to the historic vocabulary of the existing buildings, with mild steel and brass used for designing the lighting and doors. What followed was an intensive study by Arora and his team. Plaster was stripped off the walls to expose centuries-old masonry, and then restored and repainted using traditional techniques. According to Arora, this enabled them to study what “lay beneath these walls. History had to speak in a voice of its own. Baradari would become the anchor between the city and the museum”. So the team created two entrances—to extend the museum and open up another entrance to the palace.

There were some other changes in Baradari: the administrative block, now the bar with its rugged, distressed columns couldn’t hold the glass as per the earlier plan, a reason why glass doors have been placed separately. There were, however, other issues. Though the building boasted rich stonework, there was a problem with design continuity. None of the columns were identical. On the face of it, it looked, well, “imperfect”—a concern for the Jaipur royalty known for their impeccable taste. After a while, however, the design team and the royal family agreed that the beauty was precisely in expressing the organic nature of this centuries-old structure. Walk into Baradari and the columns do emerge as a flawless design construct simply because the material palette (stone) and the color unify them. Princess Diya Kumari of Jaipur sums it up well: “The City Palace is an integral part of the rich legacy of Jaipur. While one takes immense pride in the history of these grand structures, one also understands how important it is to move with the times. I wanted Baradari to be an impressive space boasting the rich lineage of Jaipur with a visual language that was both contemporary and traditional. For us, it was important to retain the original structures and work within that framework to make it relevant in the present day.”

ALL INFORMATION ABOUT BARADARI PALACE JAIPUR

A Pavilion in the form of a Baradari (literally translated – as a pavilion with 12 columns) was inserted in the form of a bar into the courtyard to divide it yet connect the two zones flanking it. This contemporary expression of handcrafted marble and brass accentuates the textures and forms of the historic structures that surround it and gives the place its key identity. It also becomes a marker of today in the building’s timeline. The courtyard also serves as a Connector by opening up between the Museum and the city through a secondary entrance – making the courtyard a semi-private spine of that connection.

The Baradari at City Palace Jaipur in Rajasthan cites an example of how design brings inherent value to a place when conventions on conservation and adaptive reuse are looked at through a fresh lens. A key conceptual move was to use the courtyard as a binding element for the new program rather than just an extension of the restaurant. This meant dismantling an existing structure, being used as a toilet block, from the middle of the courtyard to open up the area both visually and spatially. A Pavilion in the form of a Baradari (literally translated – as a pavilion with 12 columns) was inserted in the form of a bar into the courtyard to divide yet link the two zones flanking it. Built-in handcrafted marble and brass, the contemporary expression of the Baradari-inspired Pavilion heightens the surrounding historic vocabulary and gives the place its key identity.